The 2022 fiddle contest season is quickly approaching, so I thought I’d put together a list of contests for this year. I’m only including contests that I’ve attended recently and/or know who is running them, so I can be reasonably sure they will happen and find out in the event of a cancelation.

If you know of a contest that I’ve left out, please email me at mail@justinbranum.com and I’ll include it in this post.

If you’re in need of material and/or coaching, make sure you check out the video lessons on: https://masterfiddle.com Subscribers get $25 off the cost of online private lessons too!

One question I get asked more than just about any other is “what strings should I use?”. Coming in at a close 2nd is “what strings do you use?”. Unfortunately what sounds good on your fiddle might sound horrible on my fiddle and vice versa. That said, here are some general guidelines you can follow that will at least give you a starting point.

In this post I’ll be presenting the main strings that tend to be favored by violinists/fiddlers playing fiddle styles, my own take on them, and what they might work best for in terms of instrument tone/playing style. The tension you’d start with would generally be medium but in some cases because of the differences in brand measurements and setups on fiddles, you might go with heavy or light. I’ll make note of where this might be the case. Heavy tension strings are generally going to give more body to the sound and allow you to dig in more but take more energy to engage. Light tension strings might let instruments that sound choked or pinched off sing out a little more and improve their responsiveness.

Starting with what is probably the most popular brand among fiddlers of all styles is D’Addario Helicore strings. Helicore are a great all around string that have plenty of clarity and punch but not what I would call brightness. They also have plenty of body to their tone which make that clarity and punch have more of a “fiddle” characteristic as opposed to the brilliance you’d want for a concert violinist setup that cuts through an entire orchestra without a mic. If Thomastik Dominants are considered the baseline strings to compare all others to for classical violinists, Helicore are that to fiddlers. All that said, I do not use Helicore and rarely put them on a fiddle as a first choice. Their wrapping has a tendency to grab my fingers unless I am very deliberate with placement and the tension on Helicore feels very stiff under my left hand. I like to play with an extremely relaxed posture using minimal movement, because that enhances both the sound and feel I’m going for. If Helicore had a smoother left hand feel with more flexibility, then I think they might be the perfect string! In my case, because of playing preference, I might go for the light tension, although that could have the potential to be brighter than medium or heavy tension strings.

Staying within the Helicore range of tones we’ll move into Prims. When I was growing up playing dances and fiddle contests, all the old-timers used Prims, so naturally I used them too. While I haven’t used Prim strings in a long time, they can be quite bright and responsive. On an inexpensive older instrument that runs towards being muted or muddy, they might be just what the doctor (or luthier in this case) ordered. On other instruments they can be a disaster. A lot of Prim users end up liking Helicore better because they have similar characteristics with more complexity and body. While Prims are not in vogue anymore with contemporary players, they definitely have a place on the right instrument and for people who tend to play more old-time styles.

Moving into a different range of tones we’ll take a look at Thomastik Superflexible. These strings are a good baseline for warm and smooth sounding strings that still have responsiveness and what I would term punch rather than clarity. These strings suit many instruments and are also low on bow noise (especially at softer dynamics), making them favored by many studio players here in Nashville. They work for a wide variety of styles, although I don’t think they suit classical playing particularly well. My favorite thing about these strings is their soft flexible feel and responsiveness. They can be somewhat dull or lifeless on the wrong instrument and definitely rank lower in terms of tonal complexity. On a lively fiddle with good response, these will give you the Nashville studio sound. On a dark and unresponsive fiddle they can work really well or sound too mushy. Oddly enough on brighter instruments they sometimes sound very dead and harsh if the instrument doesn’t have much tonal complexity. They can also veil an instrument that has pleasing complex overtones that help to sweeten it's brightness. In that case, I might look at strings more often used by classical players that have a synthetic gut core but enough warmth to be used in fiddling (Corelli Crystal or Warchal Karneol might be an option in a comparable or lower price range).

Finally we’ll take a look at Jargar strings. Famously used by Johnny Gimble and Danish jazz violinist Svend Asmussen, these strings are definitely favored by jazz players who play amplified and want a warm horn like tone. Jargar strings are incredibly smooth to the touch and very low on overtones. This is great for electric playing where subtle frequencies become ear piercing annoyances but not so good for weaker instruments that need more coloration to sound good. Also not great if you are playing acoustically as they tend to sound dead after a week or so. If I exclusively played clubs through an amp with a loud band or had a really loud and brittle sounding fiddle, Jargars would be my go to.

A couple strings I’ll give honorable mentions to as they tend to be used less by fiddlers are Pirastro Evah Pirazzi and Thomastik Vision Heavy. Evah are closer to Helicore but with tremendous brightness and punch. I would even say sparkle. I’ve always wanted to like Evah Pirazzi but just can’t seem to get past the high end hissing at low volume dynamics which really kills the vibe backing up a singer in a more intimate setting. For the right player or on the right instrument, I’m sure they can be awesome. Vision Heavy are very much like Thomastik Superflexible but work better on instruments that need a lot of digging in to bring the sound out and/or more body to their sound. If Superflexibles seem good but they bottom out before you can get the tone you want or they make your instrument sound lack luster, then Vision Heavy might be a better choice.

Hopefully these descriptions and my opinions help give you a starting point to find the strings that best suit you and your instrument. Sound and tone are subjective, so please take everything I say with that grain of salt. Often the best way to try strings is to develop a relationship with your local luthier. They may even take back strings if you decide you can’t use them on your instrument. Capable luthiers may also be able to make an educated guess as to what might sound best on your instrument and if you need additional setup, tonal adjustments, or a new instrument altogether to get what you need, or a just a simple string change.

Thanks for reading this blog post and be sure to check back every Wednesday for new posts! 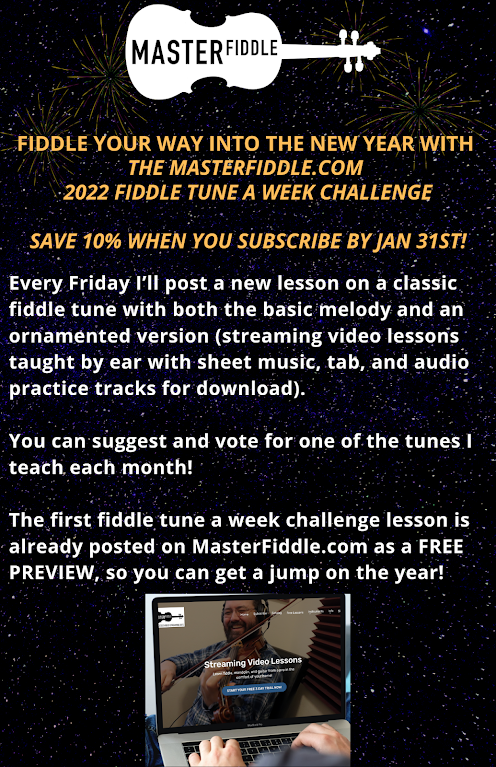 The 2022 fiddle contest season is quickly approaching, so I thought I’d put together a list of contests for this year. I’m only including co...